Bags, Pudge And The Rock Get Halll Call

One guy had one of the more awkward batting stances in baseball. One guy was the most feared defensive catchers in the game. The last guy had to wait 10 years, the last year he would be eligible. Jeff “Bags” Bagwell, Ivan “Pudge” Rodriguez and Tim “Rock” Raines were selected to the 2017 Hall of Fame and will be inducted on Sunday, July 30th in Cooperstown, New York. All three players were introduced to the media at the St. Regis hotel last Wednesday after receiving the phone call the day before. 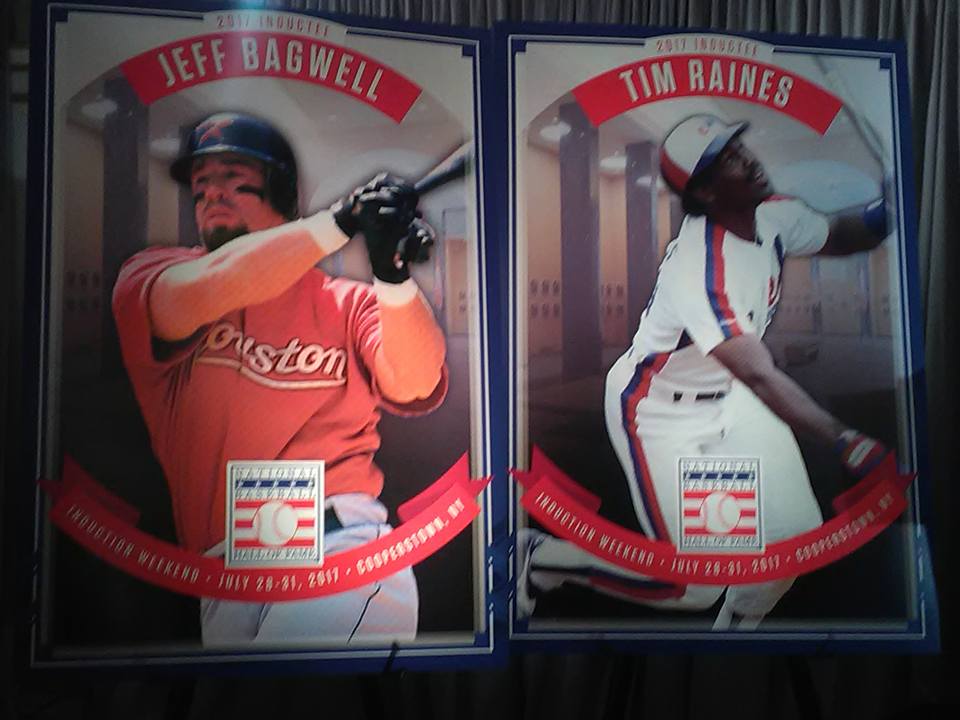 In a era where players move from team to team throughout their career, Jeff Bagwell played all 15 seasons with the Houston Astros. At the end of his stellar ccareer, playing a position (1st base) many thought he was to big for, “Bags” is the only player in the long history of the game to hit at least 30 home runs, drive in more than 100 runs, score more than 100 runs and walk more than 100 times in 6 straight seasons.

His low and wide crouching batting stance was as successful as it was uncomfortable to watch. To this day, Bagwell does not know the origin of his batting stance. As a young player, he copied the stances of Tony Gwynn, Carl Yastrzemski and Don Mattingly. Gwynn told him one day: “Man, keep your stance the way it is all the time. Don’t mess with it.” Bagwell finished with a .297 BA, 2,314 hits, 449 home runs and 1,529 rbi. Unlike Rodriguez and Raines, he will have not have to choose  what cap he will wear when inducted, going in as a Astro. The soft spoken player from Boston talked about what got him through his 15 year odyssey. “There’s one thing in this baseball world,” he began. “You have to be able to laugh at each other. Make fun  of each other. It is truly an honor to be here.”

Tim “Rock” Raines played 23 years in the major leagues with 6 different teams but it was his first team, the Montreal Expos, where he established himself as one the most prolific base stealers of all time. At the end of his career, Raines finished with 808 steals. While 4 other players had more steals, Raines finished with the best stolen base percentage of 84.7 the most of any player with 400 or more attempts. Raines attempted 954. He stole 70 or more bases from 1981 through 1986. Offensively, Raines did it from both sides of the plate as no one has ever hit 100 triples, 150 home runs while stealing 600 bases. A 7 time All Star, All Star game MVP, 1986 Batiting Champ and 3 time World Series Champion (2 as a member of the New York Yankees) Raines #30 was retired by the Expos. His longevity and consistency had many wonder why it took so long for the writers to elect him. This was the last year he would have been eligible. “I’d like to say thank you all for coming,” after being introduced. “It’s been a long time, it’s been a process for me. This is my tenth year, my last year of eligibilty. The writers finally got it right.” Tim Raines will go into the Hall of Fame wearing the cap of the team that gave him his start the Montreal Expos. Asked who would introduce him, Raines hesitated. “I really haven’t thought about,” he said. I think I would like Andre Dawson.” They were teammates for 8 years and Dawson has been vocal in Raines getting inducted. Said Dawson a couple of years ago, “you are talking about a player who played 20-something years. He was consistent and steady.” Tim Raines overcame using drugs in the early part of his career as he didn’t know how to handle being so successful, so quckly. He relied on Dawson and other veterans to make him realize he could have a successful career. “I’m so proud to be here, said Raines. “It’s actually something I never really expected. I’m happy and honored to be here.” 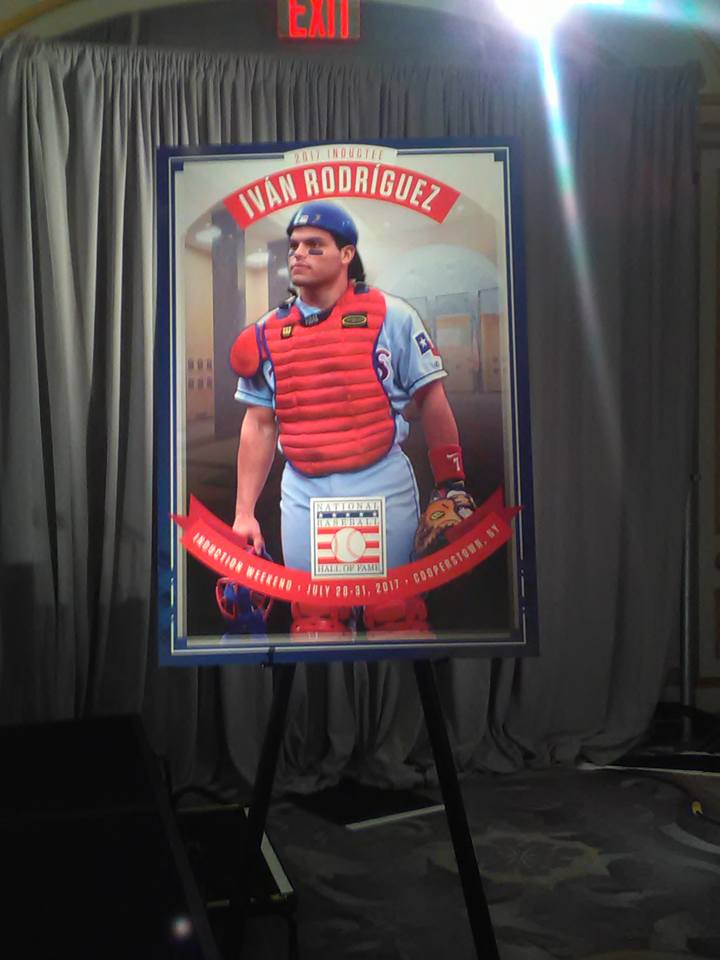 In the history of the Hall of Fame, only 52 players have been inducted in their first year of eligibility. Not only did Ivan “Pudge” Rodriguez get inducted in his first year of eligibility, he became only the second catcher to get inducted in his first year. Johnny Bench was the first. Rodriguez, from Manati, Puerto Rico becomes the youngest Hall of Famer. 12 of his 21 years in the bigs were as a member of the Texas Rangers. From 1992 through 2001 he made the All Star team as well as winning the Golden Glove award as outstanding catcher. Pudge ended up with a total of 13 GG Awards the most by any catcher. He finished with over 14,800 putouts and 1,227 assist. As grueling and taxing catching can be, it didn’t effect his offense. 2,844 hits, 1,354 runs, 572 doubles and 4,451 total bases accumulated by the time he hung up the shin guards. As proud as he is of his offensive production, it’s the defense that he’s most proud of. “You know offensively I have a great career,” he said. “But you know my main game was defense and that’s why, you know, I take a lot of pride to be a defensive catcher.” The faith and support from his family (wife, 1 son, 2 daughters) helped as he made his way through the majors. Rodriguez acknowledged them giving them the credit for his success. “You just don’t how hard it is for the family to raising the kids while we are traveling.” In 2003, Rodriguez was an integral part of the Florida Marlins that won the World Series. They were not suppose to get by the heavily favored Giants. In the series clinching game, Rodriguez is nailed by J.T. Snow attempting to score the game tying run. Rodriguez holds on to the ball, clinching the series. “To me that is one of the best plays that I made in my career, he recalled. Florida would go on to win the World Series beating the Yankees in six games. Knowing he was eligible was a little unnerving for Rodriguez. He wasn’t able to sleep well the nights leading up to the announcement. “It was hard for me. I was very anxious about the whole situation. It was some big hopes but at the same time we don’t know what’s going to happen. You know, just being the fourth Puerto Rican and Latin American player to be in the Hall of Fame in the history is an honor to be in that list.

One player (Bagwell) had a unique batting stance that had never been seen. One player (Raines) was down to his last year of eligibilty. One player (Rodriguez) was on the ballot for the very first time. The Hall of Fame called all three and they deserved to be inducted. 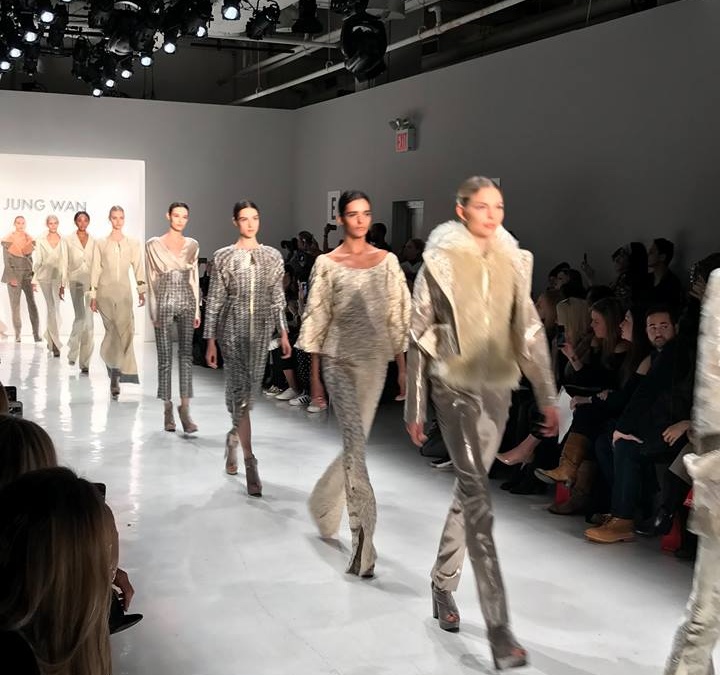 ELE News / Noticias #MaskImpact      Mask Impact is a project started to help with the production of much-needed N95-like Masks on commercial and consumer 3D printers for use in hospitals locally, nationally, and eventually globally.... 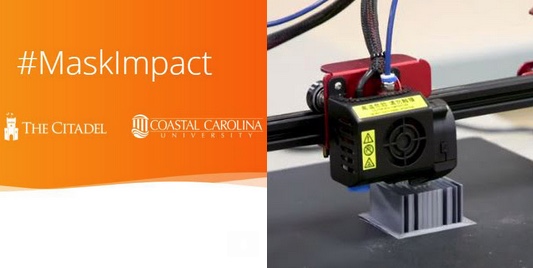