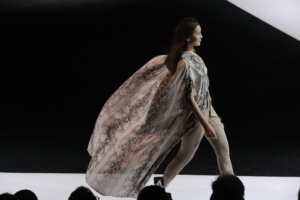 NEW YORK, NY – January 24, 2017 Carlton Jones is making moves no one before him has made before. His recent return from Harbin Fashion Week 2017 (Jan. 12-26, 2017 in Harbin Xicheng) has placed him in the fashion books of firsts, as the first American to show at the Chinese fashion capitol. His show “Snow Colorful” took the Red Square by storm.

His resort/spring line in China also gained him the prestigious award for the Best Marketable Recognized Brand. A full video of this show can be viewed here. His newest line can also be purchased at https://www.carltonjonescollection.com/.

Carlton Jones is the epitome of the American Dream. A move from Wilmington, NC brought him to the heart of Harlem, New York, where he has steadily grown his career.

Jones began first as a stylist assistant to curate his sense of style. Once he mastered his craft, it was impossible for him to be ignored by the industry, and his work was shown in editorials and campaigns, leading him to work for such magazines as Vogue, Glamour, GQ, and Essence.

He has reach international acclaim from various fashion platforms where he has shown his collection from NYC Fashion Week, Caribbean Fashion Week, and now as the first American to show at Harbin Fashion Week 2017, receiving a prestigious award for the Most Recognized Marketable Brand.

He has also assumed a role as Fashion Director for World Bride Magazine, the growing international, multi-cultural bridal magazine. The collaboration seems to be moving the same direction of global search for international inspiration by various cultures and experiences.

Carlton Jones is in fact the renaissance man for today’s fashion figures. For media inquiries and bookings, contact Myrdith Leon-McCormack of MLM Represents.

MLM Represents is a brand development agency that promotes artists, showcasing their works and presenting them in their element. Talents range from actors, filmmakers, hair stylists, makeup artists and photographers, among others. The company website can be found at www.mlmrepresents.com.