With the support of the Estefans, the scholarship allows 17-year-old pianist to pursue a bachelor’s degree in music at Berklee College of Music
Foundation hits $5 million donation milestone in five years 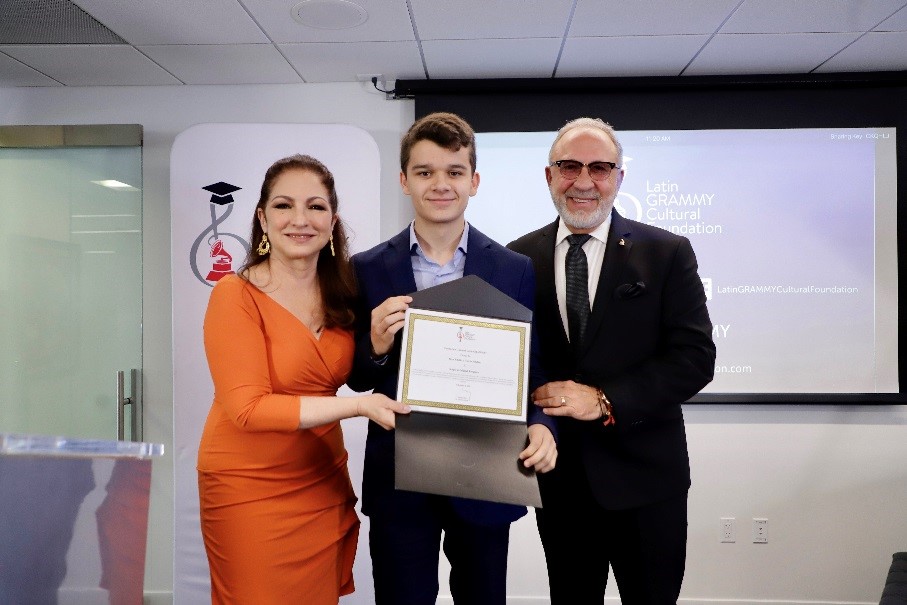 MIAMI (JUNE 19, 2019)—The Latin GRAMMY Cultural Foundation®  awarded the Emilio and Gloria Estefan Scholarship to 17-year-old piano student Sergio De Miguel Jorquera at a scholarship presentation at The Latin Recording Academy® headquarters in Miami. The scholarship has a maximum value of $200,000 USD and provides De Miguel Jorquera the opportunity to earn a four-year bachelor’s degree at Berklee College of Music in Boston beginning September 2019.

The student from Vigo, Spain, was selected by the Latin GRAMMY Cultural Foundation’s Scholarship Committee from among a highly competitive pool of applicants consisting of hundreds of students from the Americas and the Iberian Peninsula.

As of today, the Latin GRAMMY Cultural Foundation has donated a remarkable $5 million USD toward scholarships, musical instrument donations, and educational events in Ibero-America, in only five years since its establishment.

“It brings me great joy to award our fifth Prodigy Scholarship for a fully paid bachelor’s degree at Berklee” said Manolo Díaz, Senior Vice President of the Latin GRAMMY Cultural Foundation. “Through the impressive generosity of music icons such as Emilio and Gloria Estefan we are able to support the next generation of Latin music makers.”

“We were amazed and totally impressed by Sergio’s talent,” said Emilio Estefan. “He is a gifted musician and we are very proud to help him achieve his dream of a musical education. We have seen first-hand what Berklee can do for young aspiring artists and will help him succeed through these formative years”.

De Miguel Jorquera started playing piano when he was 4 years old. He studied at the Conservatorio Profesional de Música de Vigo, where he is a pianist for the school’s jazz band. He also has participated in Berklee’s Five Week Summer Performance Program in Boston in 2018 and 2017. His goal is to become a professional musician in order to create new musical directions, and promote and connect his roots to his work in a way that will allow him to give back to his community.

“I’m very thankful to the Latin GRAMMY Cultural Foundation and Emilio and Gloria Estefan for giving me this great opportunity, which will help me achieve my goal of becoming a professional musician surrounded by the very best teachers and peers. I’m going to work hard at Berklee to become a good example and part of the Latin music world,” said De Miguel Jorquera.

“Berklee is honored to have the support of industry trailblazers Emilio and Gloria Estefan,” said Berklee President Roger H. Brown. “Their generosity, in tandem with that of the Latin GRAMMY Cultural Foundation, will allow Sergio De Miguel Jorquera to join the next generation of Berklee students who will create new connections and push boundaries in the music industry and beyond.”

De Miguel Jorquera will join past winners of the Prodigy Scholarship, including:

To qualify for annual financial assistance, De Miguel Jorquera must maintain a 3.5 GPA and fulfill the standards of excellence set forth by the Latin GRAMMY Cultural Foundation and Berklee, which are evaluated each semester.

ABOUT THE LATIN GRAMMY CULTURAL FOUNDATION:
The Latin GRAMMY Cultural Foundation was established by The Latin Recording Academy to promote international awareness and appreciation of the significant contributions of Latin music and its makers to the world’s culture, and to protect its rich musical legacy and heritage. The Foundation’s primary charitable focus is to provide scholarships to students interested in Latin music with financial needs, as well as grants to scholars and organizations worldwide for research and preservation of diverse Latin music genres. Take action in supporting our mission by donating today via our Facebook page. For additional information, please visit us at www.latingrammyculturalfoundation.com. For the latest news and exclusive content, follow us at @latingrammyfdn on Twitter and Instagram, and Latin GRAMMY Cultural Foundation on Facebook.

ABOUT BERKLEE COLLEGE OF MUSIC:
Berklee is the preeminent institute of contemporary music and the performing arts, offering undergraduate and graduate degree programs at its campuses in Boston, Massachusetts, and Valencia, Spain, and through its award-winning distance learning program, Berklee Online. Dedicated to nurturing the creative and career potential of the world’s most inspired artists, Berklee’s commitment to arts education is reflected in the work of its students, faculty, and alumni—hundreds of whom have been recognized with GRAMMY®, Tony, Oscar, and Emmy Awards. At Berklee College of Music and Boston Conservatory at Berklee, students explore interdisciplinary approaches to music, dance, theater, film, business, healthcare, education, technology, and more. Our pioneering youth programs reach underserved classrooms throughout the U.S. and beyond. With students and alumni from more than 100 nations and educational partners across the world, we are forging new connections among art forms, musical traditions, and technologies to build a dynamic, diverse, and collaborative global arts community. Learn more at berklee.edu.

ABOUT EMILIO ESTEFAN:
A multiple Latin GRAMMY and GRAMMY winner, Emilio Estefan is a musician, songwriter, record and television producer, best-selling author, filmmaker, and cultural ambassador. He has shaped and directed the careers of many musical talents, including Shakira, Ricky Martin, Marc Anthony, Jon Secada, Jennifer López, and many others. He is one of the founding leaders of the Latin GRAMMY Awards®.  Estefan was honored with the Presidential Medal of Freedom, a star on the Hollywood Walk of Fame, and the Songwriters Hall of Fame presented him with a lifetime achievement award.  He was selected as the second vice chair to the Commission for the National Museum of the American Latino by President Barack Obama, and President George W. Bush appointed him as a member of the President’s Committee of the Arts and Humanities.  He is an entrepreneur, owning and operating seven restaurants, two hotels and an internationally recognized publishing company. In 2019, along with his wife Gloria, Emilio received the coveted Gershwin Prize by the Library of Congress for excellence in songwriting.

ABOUT GLORIA ESTEFAN:
Gloria Estefan is one of the most successful crossover artists in Latin music history. She is a multiple Latin GRAMMY and GRAMMY-winning singer, songwriter, actress, author of two New York Times best-selling children’s books, and executive producer of the Tony-nominated musical, On Your Feet!  She is considered the most successful Latin crossover artist having sold more than 100 million records worldwide and achieved 38 No. 1 hits across the Billboard charts. Her many achievements are a testament to her success: an Oscar nomination for the song “Music Of The Heart”; the Presidential Medal of Freedom; Kennedy Center Honors; a star on the Hollywood Walk of Fame; Spain’s Gold Medal of Merit in the Fine Arts; and a National Artistic Achievement Award from the United States Congress, among many others. She and husband Emilio received the coveted Gershwin Prize from the Library of Congress for excellence in songwriting and she is scheduled to release a new album in 2019.

El Museo del Barrio, the Museum of the City of New York, and The Africa Center are delighted to invite you to join us for the return of the annual Uptown Bounce, a free community celebration, on Saturday, August 7 from 2 – 6pm.